Oh, Central Park…one of my favorite places in New York City. No matter the time of year or the weather, summer or winter, rain or shine, the paths in the park are open to all for running, walking, cycling, and generally taking in the glorious surroundings. I’m a nature girl at heart, and it’s hard to find a place to escape it all in the city. Manhattan can definitely feel claustrophobic, with street after street of multistory buildings and a transportation system that, while efficient, makes the traveler feel a bit like a sardine. Don’t get me wrong, I love my native city, and I think the subway is perhaps the greatest invention ever to hit the five boroughs in terms of moving people from Point A to Point B – but it’s wonderful to have one place to go to find some serenity in the city that never sleeps.

It’s great for a walker like me – if I’m going from the Upper East Side to the Upper West Side or back again, I’ll usually walk across the park instead of dealing with the bus. I’ve been known to make the four-mile trek to school in Morningside Heights on foot across the park, rather than deal with public transport. What can I say…I walk like a New Yorker! 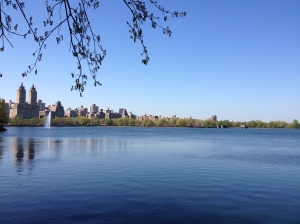 On the pathway at the Jacqueline Kennedy Onassis Reservoir

The park is also the best place to run. There are paths along the rivers, and some fearless folk take to the streets – but I can’t imagine running anywhere else. It gets crowded, especially on summer Saturday mornings, when it seems as if millions of Manhattanites have descended upon the park paths – but if you go early in the morning like me, it’s a wonderfully calm start to the day! It also doesn’t hurt to know a few of the ins and outs of the running trails. The path around the reservoir (at right) is gorgeous but also insanely popular for family strolls, casual joggers, runners training for marathons, and tourists alike…

…so, I often head down the bridle path (it’s dirt and gravel instead of pavement, easier on the poor knees of a 23-year-old!) An added bonus is the lower level of congestion and ability to serpentine a longer path around the park, stretching the usual 6-mile/10K loop if it’s a long run day. 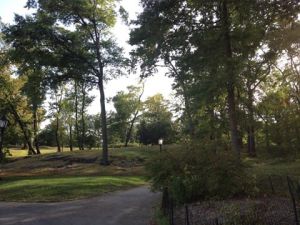 On the bridle path near West 96th Street

Plus, you never know what you’ll run into if you veer off the beaten path – I’ve bumped into friends, fellow law students, and even happened upon a wedding! 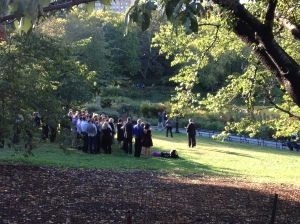