This Friday, I’m sharing a few ways I’ve realized are great for taking a step back when studying for a big exam and putting everything in perspective. I don’t often “stress” about a test, but I can get bogged down in the midst of preparing and start to feel generally gloomy. Each of these things helps me to feel what I rationally know is true – that this test, right now, might be dominating the present, but it’s really just a blip in the grand scheme of life. That’s really helpful to me, a forest-through-the-trees kind of girl. Just a quick note that I left eats and exercise out of this little roundup – while long runs and rising early to greet the dawn can do wonders for the soul, and there’s nothing like a healthy helping of dessert in the form of frozen treats as comfort food, the following list focuses on other things 🙂

END_OF_DOCUMENT_TOKEN_TO_BE_REPLACED

A couple of weeks ago, I shared my first trip to Ferris Acres Creamery with you. It’s pretty obvious that ice cream is one of my main food groups, so a find like this is just the best thing! It’s the perfect distance from my family’s home in Connecticut – far enough that it won’t be a daily or weekly treat while I’m home studying for the bar exam this summer, but close enough to be an every-so-often sweet surprise. Last Saturday, my dad and I went for another round in honor of my law school graduation. On the actual day, I went to lunch with my parents and all four of my grandparents, but I ended up being a little sidelined on such a special day due to logistics and such (which was okay, because I love my family!) So I was happy to get this little moment of sunshine and sweet ice cream. Also, cows.

END_OF_DOCUMENT_TOKEN_TO_BE_REPLACED

This week has been full of reminders that sometimes, it’s best to take a step back and take stock of your life, and find joy in the little things. It’s so easy to fall into a pattern where everything seems mundane. Instead of doing that, I’m thinking out loud about a few of the moments I’ve recently had that brightened up my day and made me feel like everything’s going to work out in the end!

Sunrise over the East River

Yesterday, watching the last moments of the sunrise over the East River as I jogged up to meet everyone at November Project, I was reminded again how shockingly beautiful nature is. Unadorned and unaltered by mankind, it’s bigger and brighter than all of us (and we should work hard to keep it that way!)

Later in the morning, I saw a group of the cutest puppies on my way out the door. If you can believe it, dog-walkers in New York handle twice as many pups as this at one time – this was the group for the left-hand leash! It’s so nice for the dogs that the weather is better, they can run and play in the park to their heart’s content without worrying about salt in their paws.

END_OF_DOCUMENT_TOKEN_TO_BE_REPLACED

So said Charles Schulz, creator of Peanuts. I am in complete agreement. My dog Sasha, a beautiful yellow Labrador, is the center of attention in our family, and in return she is loving, loyal, and always ready to snuggle. She is a consistent source of comfort and joy in our lives, and I don’t know what we’d do without her. So although I’ve shared a few photos of her before, I wanted to take today to give you a proper introduction!

Our first dog when I was growing up was Shayna, another yellow Labrador, who was a member of the family before my brother or I were even thought of. She was a wonderful dog, who definitely behaved according to her place as our predecessor, watching over us like a guardian who slept between the doors of our two bedrooms at night. Sadly, she passed away when I was in middle school. A few years later, we decided it was time to bring another puppy into our family, and Sasha was born on Valentine’s Day of 2006.

We got the call from the breeder while watching the figure skating competition of the Torino Winter Olympics. My mom and I both loved Sasha Cohen’s routines, and thus came our Sasha’s name! I like to joke that it was already in the cards. Shayna came first in our family, but before her, my parents’ respective dogs when they were younger were named Sparky and Socky. It was a totally unintentional tradition, but Sasha carried on the S initial.

Taking over the armchair in the library

She grew from the most adorable little puppy into one of the cutest adult dogs ever. It’s funny, but she seems to know her place in our family just like Shayna did – except her place is that of the baby, who came into a household with two teenagers and was doted on by everyone. And she still has a puppy face, even at age 9. When Sasha is in a room, she commands the attention of everyone present. She has her spot on a choice piece of furniture in every room of my childhood home, whether it’s right in the middle of your bed or on the center cushion of the living room couch.

END_OF_DOCUMENT_TOKEN_TO_BE_REPLACED

Marching through the spring snow

This winter seemed like it would never end, what with the snow and freezing temperatures taking over the Northeast from the holiday season well into March. There was half a foot of fresh powder on what was technically the first day of spring in the tristate area! I’m grateful that where I live wasn’t hit as hard as Boston or Buffalo. And though I may lace up and dash through the snow, waking up for my workouts all winter no matter what, brushing off concerns with the thoughts that others have it worse, I’m still so thrilled when signs of spring appear.

A river runs through once more

Earlier this week, I saw a ship chugging down the East River under a sparkling sun. The river is no longer frozen, with floes of ice so large it would be dangerous for any boat to pass through. While it’s still chilly, the water is moving again and nature is back on its proper course. The sparkling sun attested to that fact! On a related note, I took this photo from the river running path, which is finally free of the thick sheet of ice and resulting slush that made it hazardous for months. This means that November Project PR Day for April won’t require running in an ice bath! 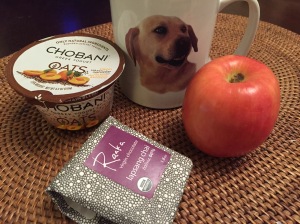 Fuel for body and mind

Thursday we had misty rain, with temps in the mid-50s and rising. Today was a little nippy again (snowflakes!) That plus nerves meant I was experiencing some shivers this morning. I ate a small breakfast before heading to Columbia for the 8:30am start. A half-cup of coffee, a Chobani Oats apricot yogurt, a small apple, and a few squares of dark chocolate with black tea leaves (hey, dark chocolate is brain food!)  The new Chobani Oats flavors also contain chia, quinoa, and amaranth. I didn’t realize when I picked it up, and it was the first time I tried chia seeds. I’ll have to give them another go though, because the pre-test stomach butterflies were very unhelpful.

END_OF_DOCUMENT_TOKEN_TO_BE_REPLACED

Today I woke up feeling a little jumbled. It’s Friday and I have no class to attend or internship hours to fulfill, but I do have a national ethics exam for law students to take tomorrow morning at 8am! It’s sort of strange feeling like I have a jump-start to the weekend when I have to take a test on Saturday, but I decided to follow my usual rules for the day before a big test, which means taking it easy and not thinking about it too much. At this point, there’s not much I can do – if I don’t know something already, I’m not going to learn it by tomorrow, so it’s best to relax and refocus. To take my mind off of it, I decided to share a few things I’m loving this week with all of you, and think about them instead!

1. My Cloudsurfer sneakers. I’ve been wearing these since August now, and they’re better than any running shoe I’ve tried before. I’ve worn them on my weekly long runs and to race the Walt Disney World Half Marathon and NYC Half Marathon. I think I’ve logged 400 miles on my first pair, and 100 miles on the second pair (which I bought at the Expo in Disney, and broke in after that weekend). So far, they’ve held up very well, and with my tendency to aggravate old knee and hip injuries, they offer a nice flexible cushion without being too clunky.

A delicious base for a brunch dish

2. Garden Lites Spinach Souffle. I’ve been a fan of these gluten-free, nut-free veggie souffles for awhile now. They’re a little expensive for the size of the dish (most are 7-8 ounces and they retail for $3.79-$4.79 in the grocery stores closest to me) so I can’t eat them too often, but I love trying out new ways to use them in meals.

Brunch bowl with a spinach souffle base

Happy to behold this beauty

3. The return of one of my favorite paintings, The Lighthouse at Two Lights, to the walls of the Modern wing at the Metropolitan Museum of Art. Edward Hopper is one of my favorite artists, and of all his works the studies he did of the New England coast capture my mind and heart the most. This painting was in storage for awhile (I wandered into the Met the birthday before my last one to catch a glimpse and it was no longer there, which took a lot of birthday ice cream to make up for!) but it’s being displayed once again, at least until the Met moves the modern art to its new home in the old Whitney building. I dropped by this week after school!