Following up on this blog survey I did a few months ago, and a post about five songs I was loving this spring, I’m here with another round of favorites, five recent reads I’m loving this Friday. All five of these blog posts made an impact on me in recent weeks, whether related to running, relaxation, or recipes. Those are the real three R’s we all need!

END_OF_DOCUMENT_TOKEN_TO_BE_REPLACED

Hello and happy Friday! I’m coming at you with a Five Things I’m Loving This Friday (resurrected after a long absence, save for my Five blog survey) focused on five songs I’m loving this spring. In that survey, I mentioned five songs I’d been playing on repeat. Well, those five are still some of my favorites, and pretty close to the ones I’m sharing here, but there are more in the rotation that have been especially prominent lately. They’re perfect for the season, as the weather finally warms up for good, the sun is shining and we have lots going on, and honestly a few of them are perfect road tunes that got stuck in my head when we were driving to Philadelphia that will definitely be in the mix for our upcoming trip to Maine! Also, they’re all country-esque, just the mood I’m in I guess 🙂

END_OF_DOCUMENT_TOKEN_TO_BE_REPLACED

This Friday, I’m sharing a few of my favorite Costco finds. Some people think that big-box superstores mark the end of civilization (as I mentioned in a recent WIAW, they have been saying this since You’ve Got Mail. Fox Books was the Costco of books.) But, Costco is actually wonderful for people trying to eat healthfully without breaking the bank. Fresh and frozen fruits and vegetables make up the bulk of my family’s Costco cart, as well as dairy, eggs, fish, and poultry. And a few snacks like Angie’s and Skinny Pop popcorn. All at prices that are lower than the grocery stores in surrounding suburban Connecticut (and so much lower than in Manhattan it makes me sad to do the math!) The following are just a few of my favorite finds – which you may already have glimpsed in my past WIAW posts and will definitely be featured time and time again.

A trifecta of delicious berries

Frozen berries: Fresh berries are expensive even when they’re in season, so finding this frozen medley was a big deal! They’re not exactly the same as fresh berries, since defrosting them (either in the fridge or microwave) means they’re not going to be as firm and there will be a lot of juice coming out, but they’re perfect for using in baked goods, breakfast treats, and snacks. And the price really can’t be beat.

A sweet and tangy treat

I’ve used them to make berry muffins and as a topping for pancakes, and I swirl them into yogurt and ice cream on a regular basis. Nothing beats the wild raspberries that grow in the woods around my childhood home in Connecticut, but these are great for getting through a snowy winter – close your eyes, take a bite, and think of eating fresh berries in the summer sun! 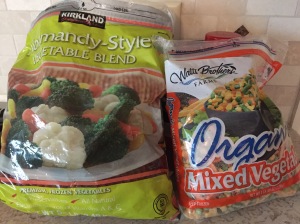 Frozen mixed vegetables: Veggies are a staple of my diet. I never had to be coaxed into eating my carrots, corn or peas – I’m still not big on green beans, but this mix is tough to beat on quality and price, so I usually douse them with a little Parmesan and dig in! I use them in everything from omelettes and breakfast bowls to colorful dinner accoutrements. Pretty much wherever you might think of to use chopped vegetables. And I use the Normandy-style blend for hearty winter recipes with broccoli, cauliflower, and carrots.

END_OF_DOCUMENT_TOKEN_TO_BE_REPLACED

The five things I’m really loving this Friday all have to do with the real arrival of spring in NYC this week! From food to fitness to fashion, it was hard to narrow it all down (so keep an eye out for next week’s post when some of them might make the cut!) And without further ado…

1. Fruit: Of course, I’m a little obsessed with all the springtime fruit spreads out on the city streets and in markets and grocery stores. I like to eat apples and bananas (like the song says!) but after a long winter, fresh colors and tastes are a welcome arrival. From plump berries to juicy peaches, I’ll be nibbling fruit by the fistful and using it in springy recipes. This week, I feasted on a Blueberry Muffin Oatmeal Cake AND a PB&J Oatmeal Cake to showcase some blueberries. Also, on a somewhat related note, I was watching Gilmore Girls on Netflix this week, and can’t stop twisting the word ‘fruit’ around in my head because of that episode where Lorelai and Rory come back from Europe without a gift for Luke, and Lorelai tries to pass off that ‘Fruits de la Terre’ jam as French!

2. Foodie Find: There’s a shop called Food Passion on the corner of 88th and Park with a name I love that I hadn’t dropped into until this week. Park Avenue above 61st Street is almost entirely residential, with approximately three retail shops for the next thirty blocks. I really like this because it means walking up Park is much more peaceful and less crowded than on neighboring Lexington and Madison Avenues. 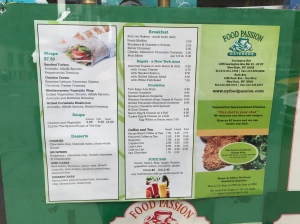 It’s mostly a catering company, but there is a small breakfast and lunch menu – you can get an omelette and a coffee or juice for under $10, which is almost impossible in this area of Manhattan. I rarely buy lunch out, preferring to pack my own, but I forgot to take my lunch out of the fridge yesterday and realized my mistake on the way to school, and had a nice cheesy omelette and cup of coffee to tide me over.

3. Fast(er) Feet: I run for body, mind, and spirit – not for speed. But, my body is a little achy-er than a 23-year-old’s should be, due to various injuries (broken right ankle, tendinitis in the right knee, and strained right hip flexor) that often mean I’m sore on the right side or overcompensating on the left. One way to combat this is trail running instead of pounding the pavement. The bridle path in Central Park was covered in a solid sheet of snow and ice all winter, and while my Due North spikes are great, there was simply too much slip-and-slide action going on. So I’m glad the paths are finally cleared and the packed dirt awaits my happy feet!

The reservoir a few weeks ago… 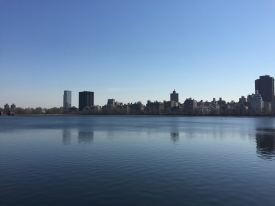 END_OF_DOCUMENT_TOKEN_TO_BE_REPLACED

Today I woke up feeling a little jumbled. It’s Friday and I have no class to attend or internship hours to fulfill, but I do have a national ethics exam for law students to take tomorrow morning at 8am! It’s sort of strange feeling like I have a jump-start to the weekend when I have to take a test on Saturday, but I decided to follow my usual rules for the day before a big test, which means taking it easy and not thinking about it too much. At this point, there’s not much I can do – if I don’t know something already, I’m not going to learn it by tomorrow, so it’s best to relax and refocus. To take my mind off of it, I decided to share a few things I’m loving this week with all of you, and think about them instead!

1. My Cloudsurfer sneakers. I’ve been wearing these since August now, and they’re better than any running shoe I’ve tried before. I’ve worn them on my weekly long runs and to race the Walt Disney World Half Marathon and NYC Half Marathon. I think I’ve logged 400 miles on my first pair, and 100 miles on the second pair (which I bought at the Expo in Disney, and broke in after that weekend). So far, they’ve held up very well, and with my tendency to aggravate old knee and hip injuries, they offer a nice flexible cushion without being too clunky.

A delicious base for a brunch dish

2. Garden Lites Spinach Souffle. I’ve been a fan of these gluten-free, nut-free veggie souffles for awhile now. They’re a little expensive for the size of the dish (most are 7-8 ounces and they retail for $3.79-$4.79 in the grocery stores closest to me) so I can’t eat them too often, but I love trying out new ways to use them in meals.

Brunch bowl with a spinach souffle base

Happy to behold this beauty

3. The return of one of my favorite paintings, The Lighthouse at Two Lights, to the walls of the Modern wing at the Metropolitan Museum of Art. Edward Hopper is one of my favorite artists, and of all his works the studies he did of the New England coast capture my mind and heart the most. This painting was in storage for awhile (I wandered into the Met the birthday before my last one to catch a glimpse and it was no longer there, which took a lot of birthday ice cream to make up for!) but it’s being displayed once again, at least until the Met moves the modern art to its new home in the old Whitney building. I dropped by this week after school!