Happy Monday! Hope everyone’s week is off to a great start. I’m thankful the sun is shining, birds are singing, and spring is firmly in the air. While that means I’ll be munching on fresh fruits and veggies more than ever, I won’t be neglecting my oats anytime soon. I’ve shared the story of how I accidentally created my oatmeal cakes. These are a staple for me, usually eaten two or three or even four mornings each week! More in winter, a little less in summer. I still much prefer them to regular bowls of oatmeal because they’re more substantial, and it takes just as much effort to cook oatmeal on the stove when you factor in time spent standing over a pot, so why not have your cake and eat it too instead?

When I started blogging and reading other blogs, I discovered the phenomenon of so-called ‘overnight oats’ and literally hundreds of recipes. I tried a few of them, thinking that it combined oats with Greek yogurt, which I love, so it must be good. Truth be told, I was not blown away. The most promising combination basically tasted like those Chobani Oats yogurts, which is to say, oat-y yogurt. It was fine, but not what I was expecting. And overnight oats without yogurt did not float my boat, because I definitely prefer anything where oats are the dominant flavor to be served warm.

I’d also seen a few recipes for “growing” your oatmeal. I didn’t want to stand over the stove, so I ignored them. And then I found Chocolate Covered Katie’s voluminous oat trick. I gave it a try, and though my microwave is so touchy that I need to stand in front of it pushing start and stop for a few minutes, the whole cooking process takes about five minutes! However, though an awesome trick and one I am thankful to Katie for sharing, the resulting bowl of oats was a little too pudding-like for my taste. I stirred a little Greek yogurt in next time I tried, and that worked better for me. The third time, I hit the jackpot, by adding in some egg whites as well, and a bit of ground flaxseed. Together, these extra ingredients gave the oatmeal a slightly fluffier but more substantial consistency, and there was an extra punch of protein. I consume a bit more protein than average and can definitely feel it when I don’t have enough in the morning, so this was great.

Finally, I discovered Peanut Butter Fingers, a blog I found because I was Googling to find deals on peanut butter (don’t ask, I’m a fiend, and I like peanut butter that happens to be a little bit pricier than average!) Julie’s recipe for egg white oatmeal provided the last tip I needed for a truly great bowl of oats. Her instructions included stirring every so often, which I had not thought to do when I reheated my oats the next morning after removing them from the fridge. So I ended up taking some ingredients and instructions from each recipe, and combining them to create the bowl that works best for my breakfast needs. There’s a saying about how all art builds on other art, and I think that’s true for cooking too – but I want to give credit where credit is due, so many thanks to both Katie and Julie! Below is the recipe for my Snickerdoodle Cloud Oatmeal Bowl. I wouldn’t have perfected it without them! 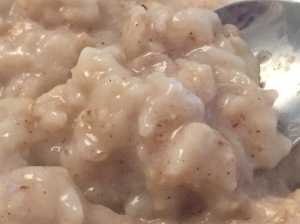 1 tsp sugar or other sweetener

1. Use Katie’s voluminous oat trick the night before by stirring together all the ingredients and microwaving in a large bowl or measuring cup. But my recipe includes some extra thickening ingredients, so you will only want to microwave for 3 minutes or so (depending on your microwave) and if it’s anything like mine, you’ll need to stop/start more often! Let sit for 5 minutes.

2. Leave the mixture in your fridge overnight.

3. The next morning, take out your oatmeal and microwave for 2 minutes, stopping halfway through to stir.

Have you tried any tricks from other bloggers and stumbled upon a new favorite recipe?

First things first – happy last day of March! I woke up to the sun shining and birds singing, and though rain is predicted later today, I’m just soaking up these rays of spring as long as they last.

I can’t believe March has come to an end. Literally up until yesterday, I thought this month was going to have arrived and be leaving like a lion, but it might just be a welcome lamb! And in between the bouts of wacky weather, my March seemed to slink by while I wasn’t looking. I celebrated the first anniversary of my first half marathon with a second stab at the New York City Half Marathon, Which also meant my second anniversary of running! 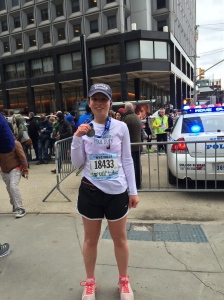 At the finish line – it’s not sweat I’m covered in, it’s pixie dust!

I conquered another challenge (much smaller in scope) without really noticing by making good on my February promise not to buy any new clothes, and doubled the time – it’s been about 9 weeks, which doesn’t seem like a lot, but the funny thing is I’ve been tempted very little (except that suddenly I’m noticing all these holes in my admittedly well-worn running gear that seem to be telling me I should splurge on a pair of Wunder Unders…)

I got to share my feelings on food and its place in our culture, and with those a plethora of recipes that I have created and cooked in my journey to enjoying food as fuel for life. Some are old standbys and some new experiments. In the mood for a sweet and filling breakfast or snack? Try one of my oatmeal cakes, in flavors like Pumpkin Spice or Blueberry Muffin. Want a savory vegetarian main dish? Baked Garlic & Thyme Tofu is here to help, unless you’re in the mood for a Savory Goat Cheese & Vegetable Tart. Want a more classic brunch? Go for Smoked Salmon & Quinoa Quiche. Need some more vegetable inspiration? Just keep reading for my last recipe of March, and keep on cooking!

END_OF_DOCUMENT_TOKEN_TO_BE_REPLACED

This rainy start to spring has put a damper on my mood recently (bad pun, no apologies) and I’ve been wishing and hoping that the sun will break through and May flowers will bloom even when it’s supposed to be April showers. After all, March went out like a lion instead of a lamb, the weather should mix it up a little! To get in the spirit of spring, I’ve been making meals with lots of spring fruits and veggies like asparagus, artichokes, baby lettuces and berries. Since I already have classically autumn apple cinnamon and pumpkin spice oatmeal cakes, I came up with a lovely Blueberry Muffin Oatmeal Cake for this season. It’s a little cakier than my other oatmeal cakes, and worthy of the muffin name for that reason. Go ahead, whip one up and take a bite bursting with berries!

For topping: 2 tsp each of Greek yogurt, cream cheese, and blueberry jam or preserves

END_OF_DOCUMENT_TOKEN_TO_BE_REPLACED

I enjoyed my pumpkin spice oatmeal cake so much, I decided to whip up another – but since I’d finished the pumpkin, I needed a new flavor palate. Enter apples and cinnamon, one of the best combinations for a warming winter treat known to all mankind! Perfect for these days when silver-white winter is supposed to turn into spring, but spring seems a little shy to come out and play…

Bake in a ramekin…

…flip into a dish to ice and serve!

2. Combine all dry ingredients in a small bowl, then add in wet ingredients (only use 1 Tbsp of yogurt here) and cubed apple and mix well.

3. Melt butter in 1-cup (8 ounce) ramekin to coat inner surface. (You can also use olive oil or cooking spray, but I found that butter worked really well in this recipe to give the cake a yummy buttery crust).

4. Bake at 400 degrees Fahrenheit for 20 minutes, then set oven to high broil for an additional 5 minutes.

5. Use a knife to carefully pry the edges of the cake from the ramekin (easy as long as it was greased well!) and flip upside down into a dish.

6. Top with 1 Tbsp of yogurt and a sprinkle of cinnamon. Enjoy!

This is a perfect post-workout breakfast – you can come home, whip up the ingredients, and stick it in the oven while you shower and get ready, then eat before you leave. It’s also a perfect lazy morning dish, because you can just lounge around reading the newspaper and slowly waking up while the oatmeal cake bakes. Basically, it’s great for everyone! And it’s completely gluten-free. What’s your go-to breakfast?

Silver-white winter as it turns into spring…means it’s the perfect time of year to combine hearty winter root vegetables with the first sweet snaps of spring shoots. I love butternut squash and asparagus separately, but they’re even better together. So here’s a simple recipe to bring out the best flavors in both! 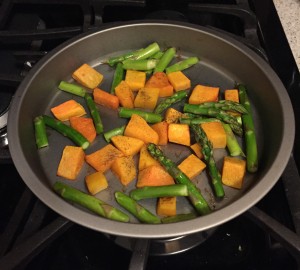 A broiled salmon burger with roasted squash and asparagus…the entree is served!

2. Arrange butternut squash on a sheet of tinfoil in a pan, or on a cookie sheet.

3. Brush olive oil over the squash and sprinkle with salt and pepper.

4. Bake squash for 25 minutes at 400 degrees. While it’s cooking, chop the asparagus.

5. Remove squash from oven and add asparagus around the cubes. Brush with oil, sprinkle with salt and pepper, and return the pan to the oven. Set to broil and cook for 15 minutes more.

What’s your favorite veggie combination? Do you try to eat seasonally?