I discovered during my recent elimination diet that gluten free grains were contributing to my stomach issues. That means that for the most part I’m leaving grains like oats, rice, and corn out of the array of foods I consume on a daily basis, and experimenting with grain free flours like quinoa, buckwheat, coconut, and tapioca in my baking endeavors. I’m still indulging occasionally, like with the gluten free Mickey waffles I had last weekend in Florida or maybe a bit of rice when I go out for a good sushi dinner. But 90% of the time I’m on the grain free bandwagon, and that means saying goodbye to the baked oatmeal cakes that I featured on the blog throughout my first year of recipe sharing. I still make many of the flavors using quinoa flakes rather than oats, but I thought I’d throw a spotlight on them now since they won’t be making appearances in my WIAW posts anymore! 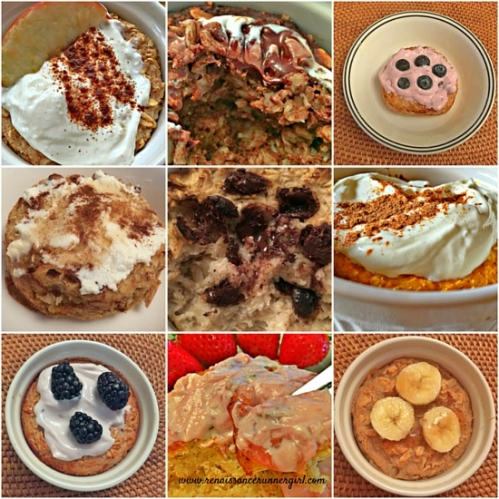 END_OF_DOCUMENT_TOKEN_TO_BE_REPLACED

First things first – my initial thought I wanted to share with all of you this Thursday was one of thrills and thanks! (Yes, I like alliteration.) Yesterday’s WIAW post meant the first day of the month was also the first day my blog received over 500 reads. It’s not why I blog, but I’m so happy that people are interested in what I have to say, and I welcome any input on what you might like to read in future. More recipes, or ramblings on life, just post in the comments below!

Now, here’s what I was thinking about yesterday when I drafted this, when a friend of mine joked that I ate more oats than anyone she knew and I should have gone to her alma mater because then I would have been a Quaker. Now, I’ve shared a lot of oat-based recipes with you, but I’m going to let everyone in on a little secret – for the first 18 years of my life, I had a major aversion to oatmeal. Crazy, right? I just had this thing about any “lumpy” foods (I loved mashed potatoes, but refused to eat them if I found even a single lump, when the fork was put down for good). Neither the color nor texture of oatmeal was visually appealing. The first time I tasted it, I was five years old and had a bowl foisted upon me by my well-meaning grandmother, who is not known for her cooking. It was lukewarm and grayish and pretty much the opposite of appetizing, and that was it. I ate oatmeal cookies, especially because even before my wheat allergy was diagnosed I had bad reactions to a lot of other baked goods, but no oatmeal.

A bowl of oats

And then I arrived in Oxford for my first year at university. The food served up in my college dining hall was mostly unappealing, as it seemed to operate on the principle of maximum calories for minimum cash – good for starving students, but not so good for a student with a sensitive stomach and lots of allergies. To make matters worse, there was a small refrigerator in the hall of my dorm, but no kitchen, and we weren’t allowed to have cooking appliances in our rooms (because of the risk of burning down a beautiful 500-year-old building, to be fair!) There was a microwave on the floor above mine but I didn’t discover it until the spring. So for the first two terms, I pretty much subsisted on yogurt, salads, cheese, fruit and veggies, and other food eaten cold, and unfortunately, more junk food (chips and crisps and chocolate) which played a role in distorting my eating habits. The saving grace of this time was my electric tea kettle – the one appliance permitted in every room in Oxford, because it was always time for tea. I could boil water, so I could make anything to which you added hot water, which meant soup, and yes, oatmeal. 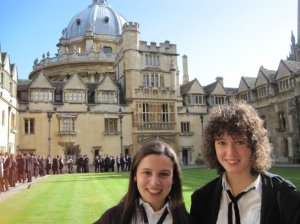 Matriculation at Oxford with my dear friend Elli

END_OF_DOCUMENT_TOKEN_TO_BE_REPLACED

This rainy start to spring has put a damper on my mood recently (bad pun, no apologies) and I’ve been wishing and hoping that the sun will break through and May flowers will bloom even when it’s supposed to be April showers. After all, March went out like a lion instead of a lamb, the weather should mix it up a little! To get in the spirit of spring, I’ve been making meals with lots of spring fruits and veggies like asparagus, artichokes, baby lettuces and berries. Since I already have classically autumn apple cinnamon and pumpkin spice oatmeal cakes, I came up with a lovely Blueberry Muffin Oatmeal Cake for this season. It’s a little cakier than my other oatmeal cakes, and worthy of the muffin name for that reason. Go ahead, whip one up and take a bite bursting with berries! 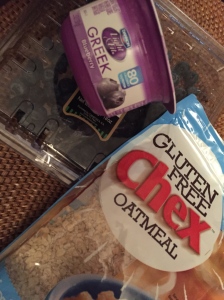 For topping: 2 tsp each of Greek yogurt, cream cheese, and blueberry jam or preserves

END_OF_DOCUMENT_TOKEN_TO_BE_REPLACED

This rainy start to spring has put a damper on my mood recently (bad pun, no apologies) and I’ve been wishing and hoping that the sun will break through and May flowers will bloom even when it’s supposed to be April showers. After all, March went out like a lion instead of a lamb, the weather should mix it up a little! To get in the spirit of spring, I’ve been making meals with lots of spring fruits and veggies like asparagus, artichokes, baby lettuces and berries.