They say that March roars in like a lion and goes out like a lamb where the weather is concerned. Well, the opposite is true if we’re talking about my life. The first two weeks of the month were relatively quiet, coming off the whirlwind of my Florida trip. Then things sped up, quite literally, with my PR in the New York City Half Marathon, continued on to a weekend escape to Connecticut, and now it’s full steam ahead into April and everything planned for the spring. Read on for my March monthly recap and a peek at what’s ahead!

The first week in March, I had a few things going on, but nothing major. A trip to the opera, dinner at East End Kitchen, the first visit of the season to Emack and Bolio’s. All good things, but definitely lower key.

As we got further into March, the winter chill seemed like it was on the wane. I thought spring had finally sprung, with a few gorgeous days topping 70 degrees in Central Park, more occasion for sundresses, striped shirts and ice cream. I shared a Behind the Instagram showcasing how I photograph my eats, and a WIAW post featuring lots of Saturday sweets.

The highlight of the second half of march was my third try at the New York City Half Marathon. I set a PR of 2:06:04 and had so much fun racing this course, the same as the first half marathon I ever ran back in March 2014. Plus, it was the same day as Macaron Day NYC, meaning a refuel of brunch food, Bareburger, and complimentary macarons around the Upper East Side. In other running news, my monthly mileage totaled 109, so I’m inching towards my 120-mile/month goal for the spring bit by bit.

Last but not least, the fourth weekend in March was spent outside the city at my family’s house in Connecticut, celebrating my mom’s birthday, introducing Brett to the town where I grew up, playing with my puppy, and eating even more ice cream. Does that surprise you at all?

Along the way, I made a commitment to creating and crafting posts for new recipes again, now that I’m settling into a more grain-limited food routine. When I was simply gluten free, I was posting recipes all the time, but it took awhile for me to get comfortable enough with grain free baking to feel confident in sharing my recipes. I won’t be going completely grain free, and future recipes will be a mix, but one of the first to appear here in March was my Buckwheat Quinoa Banana Muffins, along with gluten free and deliciously springy Blueberry Vanilla Muffins. 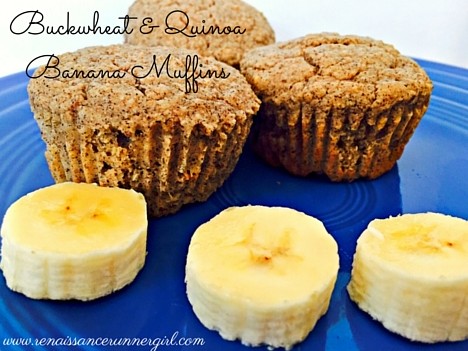 What else happened in my life and on the blog? Well, I shared the results of a blog survey, listing five favorites in categories from travel and food to books, music and movies. And I thought out loud a little bit about my shifting plans and priorities, what’s changed in my life since I started my new job in the fall and began “adulting”, and everything I have to look forward to this spring. Speaking of which, now ready for April over here!

What was the highlight of your March?

What are you looking forward to most in April?