As promised yesterday, today’s post is all about the NYRR Race to Deliver 4M and finishing the 9 plus 1 program to qualify for the New York City Marathon in 2016!

I woke up around 7:30am, drank a glass of warm lemon water and did a little foam rolling before I left. It was only a one-mile jog from my front door to the corrals for an 8:30am race! I decided to wear my NYC Half Marathon 2014 shirt to this race because when I crossed the finish line of that race, my second race and first half, the idea first occurred to me that I might be able to run a marathon someday, and I knew today was the day I would qualify for one 🙂

En route, I still felt a bit of a twinge in my right hamstring, so I spent the little time I was in my corral stretching it out and realizing how the new bib number system works at NYRR. They now put a letter in front of the number. It starts with A and the triple-digit and under bibs. I was in “E” – the 4000s – and most of last year I was in the 4000s so I’m not sure why they added letters. Maybe to make signage for the corrals easier, or to accompany the new way of combining your best NYRR race times to assign you. Anyway, during the typical shuffle up to the starting line I realized most of the people around me were slower, even going at my easy-for-me pace. I started at 8:34am and began weaving in and out, continuing for most of Mile 1. The 4000s are the 9-10 minute milers, but it felt crowded like the Dash to the Finish 5K. I passed the Mile 1 marker right near the reservoir and saw on my FitBit Zip that it was nine minutes later just by the time.

I reached the halfway point at Mile 2 in another nine minutes. I thought I could PR if I went just a little faster. And by Mile 3, I knew I was going to unless I slowed down tremendously. The little intervals I’ve been trying to do one or two mornings a week showed their worth. I was able to chug along and climb the hills throughout the race, even Cat Hill back near the start which I usually have trouble with. Though I held back a little on the downhills so as not to pound my joints too much, when I got to the flatter ground in between I adjusted my speed, and I sprinted the last quarter-mile to the finish, ensuring that my pace dropped consistently throughout the race.

I saw the official time as I crossed the finish line but hadn’t caught it when I started, so even though I finished about 38 minutes on the clock I had to check the live results tracker to be sure of my time. When I saw the overall time of 34:39 with an 8:40/mile pace, I was thrilled! 15 seconds per mile faster than last May’s Celebrate Israel 4M, and I had not run sub-9 minute miles consistently since my hip injury that happened right after that race. I drank some water and grabbed my apple, and did a little on-and-off slow jogging for ten minutes to loosen up my hamstring, which I stopped feeling about halfway in but started to pulse after the adrenaline rush wore off.

I walked through the park to get home, shower and clean up before meeting a friend for brunch. I was just so excited about the PR and finishing the 9+1, all before many of my friends even rolled out of bed on this Sunday morning! Thinking about it, I’m not totally sure why I was able to run at the pace I did for this race versus any of the others I’ve entered over the past few months. The conditions were perfect for running – just over 50 degrees, slight clouds and wind but not too much, and totally unlike a typical day for this late in November. But that couldn’t be the real reason.

It could be the interval training, however minor it is in comparison to what usually qualifies as intervals. It could be running on a more consistent schedule now that I’ve gotten into my running routine with work and life and everything going on. Or running most of the time without relying on music. Yet I’ve been running pretty slow in between those intervals and on the rest of the mornings. Or maybe I haven’t – I can’t be sure, and I decided this weekend I’m definitely going to get a real running watch. I planned to wait until closer to marathon training, but now I’m thinking January (post holiday sales) or even just going for it now. I’ve been looking at the Garmin Forerunner 10 or 15 for a cost effective option. Plus I can get a pink or purple one! Just knowing I’m in for 2016 is enough to take the leap. 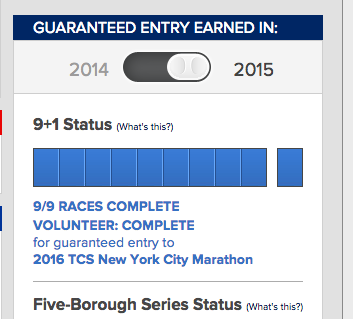 [Tweet “Setting a #personalbest at the #NYRR #RacetoDeliver and qualifying for the #NYCMarathon in 2016!”]

Have you ever run a marathon?

Does the possibility of a PR motivate you during a race?

Any recommendations for a good, not-too-pricey running watch?