This Thursday, I’m sharing the nitty-gritty details of everything I spent on my travels over the past couple of months. Before I set off on my first trip, I decided that I was going to make an effort to write down everything I spent so that I could keep track of where my money was going, and also not let things get too out of control. I knew that the total after tallying up my travels over the course of 25 days on 3 trips in 2 countries, 2 states, and more than a half-dozen cities, with transport via planes, trains, and automobiles, was going to be significant. But as I’ve shared recently, I really value experiences over the accumulation of stuff and this time after the bar exam before my new job and next phase of my life begin was a wonderful opportunity to see new places with old friends and make memories that will last a lifetime. The monetary value of tallying up my travels ended up totaling roughly $3,685.30. The rest of it? Well, that can’t be measured in dollars and cents.

The final tally includes every expenditure I made over the 25 days combined of my various trips. Transportation, lodging, food, activities, and anything else you can think of – though there wasn’t much else. One major constant across all locations and time zones was that the majority of my daily spending was on food, whether in restaurants or at grocery stores. Wherever I was, I tried to keep it in check by purchasing food for breakfast, lunch, or snacks on the go in grocery stores rather than buying it while out and about, and to limit restaurant meals to 1-2 per day. In the end, as my friend Elli said while we were hiking, it’s more expensive to be very active and fueling up than it is to be on a diet, but it’s also a lot more fun and life-affirming 🙂

Elli and I hiking in the Lake District

The other major categories were lodging and transportation, which actually ended up reasonable in the aggregate. While I did pay for 5 nights at a bed and breakfast in the Lake District, and another 5 nights at a hotel in California, the remaining 15 nights were spent on friends’ couches and in their guest bedrooms. Plus I paid the base fare for 2 of my 3 round-trip flights using frequent flyer miles. All things considered, the final tally of $3,685.30 spread across 25 days comes out to $147.40 per day, which I don’t consider a very strict budget (the New York Times runs a Frugal Traveler column that gets you full weekends in major cities for $100 or less), but it is a lot less than I grew up thinking was necessary to spend on a good vacation.

The first leg of my travels took me back across the Atlantic to England, where I spent time in London and in the Lake District visiting my friends from college. I racked up a lot of frequent flyer miles on Continental Airlines (now United) when I was flying between NYC and London 6 times a year, at Christmas, Easter, and summer vacations, each year of college. And I still had about 55,000 left, set to expire in 2016. My parents were kind and transferred 5,000 of their miles to me so that I could purchase a round-trip Economy ticket for 60,000 miles plus taxes and fees. I did have to pay for the mileage transfer between accounts, and I did spring for an Economy Plus seat on the return trip. I can deal with crammed seats and no room on the shorter eastbound flight, particularly since it’s overnight and I try to sleep (if to no avail!) but I was glad of the few inches of extra legroom on the longer westbound flight home. I knew from experience that sitting on a plane for 7 hours during daylight, those few inches can make all the difference. 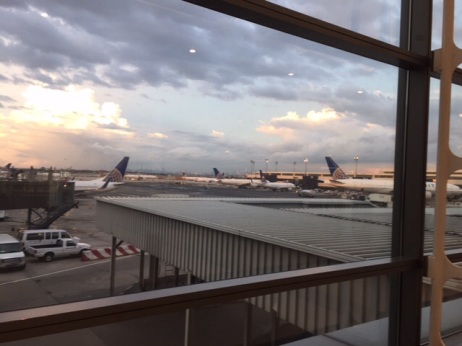 Once I was in England, transportation was a bit more expensive than in the United States. Within London, the Tube fare is calculated by zone, which is similar to San Francisco’s BART but not to the NYC subway. In New York, a subway ride is $2.75 whether you go 3 stops or 13, and you get a free transfer to a bus within two hours of the ride. In London, the fare between Zones 1 and 2 (my usual trip, since I stayed with a friend living in Zone 2 and most sights are in Zone 1) is £2.30 off-peak and £2.90 peak, capping daily at £6.40. So that adds up faster than the subway. I also paid a little over £100 for the high-speed Virgin Train between London Euston and the Lake District. Throw in getting to and from the airport, and the total cost of transportation including planes, trains, and automobiles was about £440, or $660 at roughly $1.50 to the £1.

At the Notting Hill Tube stop

I kept food costs in check by buying a lot of meals and snacks at grocery stores. In the Lake District, Elli and I shared a room at £80/night for 5 nights, or £200 total each, and this included breakfast, which we tried to take full advantage of. We stuffed ourselves with eggs, mushrooms, toast with jam and butter, and fruit each morning (and she had baked beans and sausages). Then, for each day of hiking, we went to grocery stores and bought provisions including salad, deli meat, apples and peaches, carrots, string cheese, oatcakes, and anything else we could think of. We both had reusable water bottles that we refilled at every chance we got, so there was no nonsense about buying bottled water. Each evening we did splurge on restaurant meals, but it was hearty pub fare and the most we paid per person was £13, £15 if you count the after dinner ice creams! You can read more about our eating in the Lake District. In London, I bought groceries for brunch and snacks, and again paid for restaurant meals in the evenings when I was meeting up with friends, as well as a few treats like tea with a whole group of us on a Saturday afternoon. Total grocery spending was £116.69 and restaurants at £139.58 for food spending of £256.27.

And that was pretty much it. Entry to the Wordsworth Museum in the Lake District, fees for using public toilets, and the cost of 2 souvenir postcards totaled less than £10. Food, lodging, and transport reigned over the budget. England accounted for $1,420.01 of my spending, or 38.5%. Since I was there for 13 days of the 25 total, the cost per day of my trip was less than the average for all of my travels.

My decision to run the Dumbo Double Dare was easily the most expensive part of my travels. Race registration for the Disneyland 10K and Half Marathon totaled $330, four nights at a hotel split with my cousin was just under $400 each, and theme park tickets for 4 days were $225 each. Throw in $30 for the Disneyland Express bus from LAX to the hotel, and I was already at the $1,000 mark. However, this was something I really wanted to do, and I had a blast, so I think it was worth it.

During the Disneyland Half Marathon

I did the grocery routine again by ordering apples, peaches, string cheese, baby carrots, gluten free pretzels, and Greek yogurt from Von’s, a Safeway grocery in Anaheim that offers free delivery if you order $49 of groceries. I got myself to right around that number and had the groceries delivered to my hotel, the Fairfield Inn Anaheim. They were waiting in the fridge in my room when I arrived, and this meant that all snacks and either breakfast or lunch each day was taken care of. None of the restaurant meals were extraordinarily pricey, either; my cousin and I stuck to ordering just an entree and of course we didn’t drink during the races, so while post race brunch both Saturday and Sunday was around $20 each including unlimited coffee, the dinners were $12-$25 a person. My big food splurges were on a make-your-own Mickey ice cream bar at Clarabelle’s and Mickey rice krispy treats after dinner. These were $4-$6 each. In total, restaurant meals were $135.12.

The rest of my California spending was also considerably higher than in England. While the San Diego Zoo was a pricey $48 for a one-day pass (I didn’t know before we got there, and don’t think I would have gone if I had), other activities like visiting the Cabrillo National Monument lighthouse and the beach in Coronado were free except for parking, as was admission to the Getty Villa in Malibu. My friend Ashley and I did buy snacks at grocery stores to get us through the days, but we ended up eating lunch while out and there were times I had to cough up money for bottled water because it was so hot. I also spent an unplanned night at a hotel while in San Diego due to the heat. Throw in super-high California sales tax, and in all, the San Diego and Los Angeles part of my trip got to $245.50.

As for transport, Ashley very kindly shuttled us around San Diego in her car and insisted on paying for gas, so the only costs there were the round-trip flight and getting to and from the airport. I did pay full fare on Delta, and sprung for an Economy Comfort seat on the outbound leg. I also ended up switching flights to go home and paying a small fee to do so. Airfare came out around $687. I only paid $7.75 getting to JFK from my apartment (doing the train to the plane via the MTA) and en route back, I paid $4.37 for an Uber, which was a bag of tricks (I had a $20 first time user credit and I was supposed to use UberPool but my ride share fell through – since they’d already matched us I didn’t have to pay all of her share).

Again, food, transport, and lodging were big expenditures, except this time race fees and activity spending also took a chunk of change. I bought one tank top for $32.40 – I really wanted the classic embroidered Mickey top to match one my cousin got, and if we don’t count hiking boots this was the first non-running item of clothing I purchased for ALL of 2015! That was it for souvenirs other than my race medals. So the total cost of California was $2,213.68 for 10 days.

This view at the Getty is always free!

There isn’t much to report for this last journey. I used Delta miles for the airfare, took the M60 bus to LaGuardia airport for $2.75 and was lucky to have my dad pick me up and take me home at the end, with Lauren ferrying me on the Nashville side. I spent $51.61 on restaurant meals, and she had very kindly stocked her fridge with – wait for it – apples, Greek yogurt, and string cheese, so we had plenty of snacks. And being such a sweet, thoughtful friend, she insisted on covering the cost of our activities as part of her hostess duties. I tried to return the favor by buying brunch on me each day, but it was a struggle 🙂

As much as it hit my wallet, I am so happy I got the chance to do all of this traveling before my new job begins in just over two weeks. I’m grateful for the breather after the bar exam, and writing this I feel like it must have been more than two months ago. With all the old friends I got to reunite with, old and new places to explore, races to run, hills to climb, and food to indulge in, this time was more than I could have imagined. Like I said before, you can’t put a price on that.

Do you prefer to splurge on travel or on other things?

What tips do you have for sticking to a budget while traveling?

14 thoughts on “Tallying Up My Travels”