Greetings from England! I thought I wasn’t going to post while here, but I have so much I want to jot down so I can remember it for myself that I changed my mind. It’ll be a picture per sentence kind of day since I’m writing on my iPad and have spent all day out and about, but here’s a look at the first three days of my trip across the pond 🙂

I flew out of NYC on Tuesday evening, on a 10pm flight that left around 11pm and arrived at Heathrow about 10:30am British time on Wednesday morning. I got through passport control and got to my friend Heather’s flat in London, just south of the Thames, around 12:30pm.

I was quite jetlagged after getting a few on and off hours of sleep on the plane, but wanted to make sure I got onto British time right away, so decided to eat a banana and an apple I had in my bag and go for a walk. I don’t know the south bank of London well, so I ended up wandering more than three miles to Battersea Park, which was lovely, and walking halfway down and back on Battersea Bridge. I then wandered three miles back along the Thames Path! 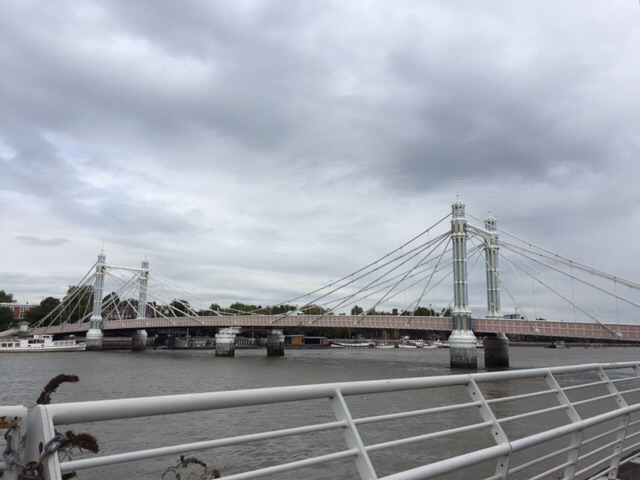 I realized on the walk back that I was absolutely ravenous, and incredibly thirsty. I’d drunk my water bottle and hadn’t eaten all day except that apple and banana, and although it was only late morning at home, it was after 4pm British time. I ended up grabbing food at Sainsbury’s and wolfing down a salad, chicken and rice, fruit, frozen yogurt, and gluten free biscuits all in the span of an hour! When Heather got home from work we had more sweets and caught up on each other’s lives.

The next morning, I went for a five mile run along  Thames path again, crossing Putney Bridge and looping around Bishop’s Park before heading back. It was drizzling but pretty – classic England!

I then took the Tube into central London to meet two of my other good friends for brunch. I met up with them in SoHo – I got a bit lost on the way there, but puzzled through with my paper map (more on that later!) We wound up at a cute spot called Brown & Whyte and had a wonderful time catching up, myself over a plate of scrambled eggs and smoked salmon.

I headed back to pack up my overnight bag after bidding my friends farewell, and went out to get a few more snacks. By the way, the ‘free from gluten’ section at Sainsbury’s and Booths and Waitrose is great for us allergy folk, it’s all in one place! Fuel was necessary because on Thursday night, I met one of my other dear friends, Elli, at Euston train station to take a trip up to the Lake District. Stay tuned for tales of our adventures there…

Ever been to London? Favorite way to beat jetlag?