I’ve been in a bit of a nostalgic mood recently, what with finishing my final law school classes and harkening back to my Oxford exams, setting up my bar exam study materials, and preparing for law school graduation. I’ve been using my blessed two weeks of free time to get in some good long runs, time with friends, and serious ice cream eating. But I’ve also been thinking about how fast time seems to have passed by, mostly because I, ever the Luddite, finally installed the Timehop app on my phone and am now inundated each morning with snapshots of what I was doing on that day the year before…and two years…and four years…and eight years ago!

Eight years. That’s how far back Timehop can track, because that’s how long I’ve been on Facebook. I opened an account in early 2007, during my sophomore year of high school, which feels like another lifetime. I’m a little scared by the fact that fully one-third of my life has been documented on Facebook and other social media, and I’m well aware of the ramifications of that. But seeing photographic evidence right in front of me of who I was eight years ago, and then looking in the mirror at the girl I am today, is a powerful reminder of how I’ve grown and changed into an almost-law-school-graduate.

Eight years ago, I was 15 years old. I was a high school sophomore. I was coming off a dozen years combined of intense commitment to ballet and gymnastics, trying to find my place in the world without the ballet studio to cleave to as my home. I didn’t realize yet that my ballet friends would continue to be some of my closest confidantes in my young adult life, so I was searching for somewhere else to fit in. I had always been a bookworm, excited by history and art and literature and reading and writing voraciously, but these were not exactly group activities for a lunch table. So I was trying other things – like joining the varsity cheerleading squad, the only place outside the ballet studio or the gym where the gumby-like flexibility I had worked for counted for anything!

…after joining the squad.

I made a few good friends that way, and began to learn about being part of a team. But I didn’t fully appreciate what that meant until I found where I really fit in team sports a few years later – as a coxswain in college. That role was the primary thing on my mind four years ago, when I was in my second year and coxing the Women’s 1st VIII at Brasenose during the Summer Eights regatta in Oxford. Only in Oxford (and Cambridge) do we compete in ‘bumps’ racing for intercollegiate sport, rather than head-to-head. The point, as the name may tell you, is literally to bump into the boat in front of you, rather than beat it to a finish line. Which causes all sorts of mayhem on the river, and gave me a tale or two to carry forward as the director of such a ship over three seasons. 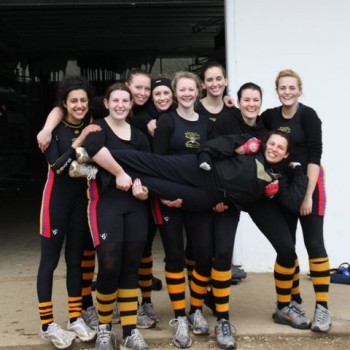 An excellent position for small but mighty me

Racing down the river

The difference in me between eight years ago and four was large enough that seeing the photos side-by-side on Timehop is jarring. I’d already come a long way from Connecticut girl to Connecticut Yankee in Oxford. High-school insecurities were fading as I learned how to be myself without regret. Oxford made it easy in some ways; reading for kicks was not exactly a unique quality among us. I found a group of friends who were as happy for me to just be me as I was – maybe even happier at times. Usually, children dream the biggest dreams they can, and life slowly constricts their view of what they think is possible. But I felt more circumscribed at fifteen, destined to play a certain role in a specific performance, and even at nineteen, than I do today. I was lucky to have grown up with opportunities in education, to travel, to indulge my extracurricular interests. I did well in school (most of the time) but achieved far more beyond it, writing a novel at seventeen, reading myself into other worlds and then traveling right into them in real life. An outsider looking in would have thought I was a bit of a golden girl, with things working out according to tune.

From the Upper East Side…

But four years ago, I was still trying to figure out who I was and wanted to be within the confines of external expectations.  I had traveled half a world away and was only just realizing that you can’t escape who you are by moving yourself to another country or continent. Wherever you go, there you are. The real change comes from recognizing what parts of life bring you joy, what parts are maybe not so enjoyable but are a necessary kind of balance in reality, and what parts should be cut out because they aren’t doing you or anyone else any good. So the difference from then to now, showcased in Technicolor on Timehop, is just as striking. The past few years, I’ve gained healthier habits en route to achieving a balanced state of mind – running, eating right, and getting enough sleep work wonders. I’ve managed to get to a place where I think about my future from the perspective of someone who understands balance, knowing that if what I am satisfied with the way my life is, I’m doing pretty well, without the need for external validation. I hope I can keep that perspective as I enter the next act in the play that is life. Onto graduation and beyond!

What do you think about when you’re rifling through old photos? Any particular memories they evoke, or feelings about now and then?