Welcome to another round of WIAW! I’m here to share yesterday’s eats with all of you, and can’t wait to see what everyone else over at Peas and Crayons has been cooking up. I was on the go pretty much all day, so you’ll see a lot of snacks! I woke up in Connecticut, went to a doctor’s appointment, hopped on Metro North and got off for class in Morningside Heights, took the subway to my internship at Lincoln Center, walked home across Central Park to the Upper East Side for dinner, left again for a Junior League meeting, and got home for good around 9pm. During that time, I consumed a lot of my go-to snacks, actually triple-timing both Greek yogurts and apples. At least I branched out with the varieties – a Dannon Greek Strawberry Banana, Fage 2% Acai Blueberry, and Fairway 2% Plain for the Greek yogurts, and Pink Lady, Honeycrisp, and Empire apples. And so, without further ado… 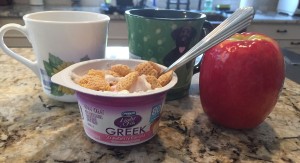 Breakfast: Today was a little snack-y, beginning with an early breakfast before an appointment in Connecticut. I had a Greek yogurt with some gluten-free Crispers (generic Crispix, sans barley malt) and a cup of decaf coffee, and an apple. 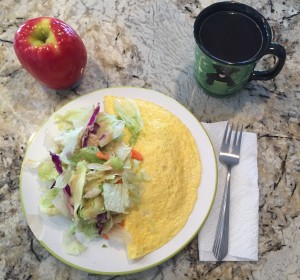 Brunch: After my appointment, I came home to eat, grab my stuff, and hop on a train back to Manhattan to head to an early afternoon class. I knew it might be my only real meal for awhile, so I whipped up a turkey cheddar omelette and had some salad with honey mustard dressing on the side (and another apple, yes). I also had a second cup of decaf coffee – a Dulce de Leche Cake Boss K-Cup.

Early afternoon snack: While in class at school, I had a Fage 2% blueberry yogurt with a Peanut Butter Cup muffin crumbled in. I’ve mentioned before that I prefer mixing my own fruit, peanut butter, etc. into Greek yogurt, but these are great for when you’re on the go and don’t have that option! I packed the muffin, two yogurts, and the soy crisps pictured below and had them with me on the train. 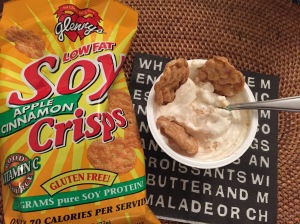 Late afternoon snack: I found these mini rice cakes (or that’s what I thought they were) and decided to give them a try because I love anything apple cinnamon (like my Caramel Apple Cinnamuffins!) They turned out to be little crispy cakes made of soy protein, and made a decent little snack with a 2% Greek yogurt. I mixed some peanut butter into the yogurt and dipped the cakes in, a fun little treat to brighten my afternoon, during the two hours working at my internship that I squeezed in after class. 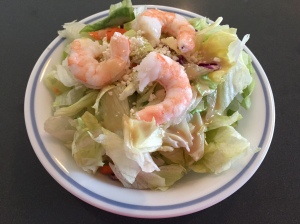 A simple salad to start

Dinner: Sometimes, even the most food-focused among us are in a rush and haven’t prepared anything ahead of time. I got home from my internship at 6pm and had exactly half an hour to cook and eat dinner before heading back out to a Junior League committee meeting at 7pm. So I turned to my freezer, where I try to keep a stash of a few frozen meals for times like this. I usually stick to some brands that I feel okay about eating – Amy’s, Evol, and Garden Lites to name a few. The meals are pricier than cooking, of course, but like I said, we all have crunch times! Tonight, I actually tried a new one, Udi’s Gluten Free Broccoli and Kale Lasagna.

Saved by the Udi’s bell

I’ve had Udi’s products before, but only recently saw their new line of frozen meals in stores near me. Since these boxed meals are never enough food to satisfy me, I try to add in whatever plain veggies and protein I have on hand in the fridge. Tonight, that meant frozen broccoli and cauliflower, and some plain cocktail shrimp. I tossed a few shrimp on a salad to eat while the meal was in the microwave, and then dug in. The meal appeared very “white” when cooked, which isn’t something I really like (colorful food is a must for both health and enjoyment in my book!) but I cut through the noodles and there were bright flecks of carrots and greens. It was pretty good – the cheese was a bit bland, but it hit the spot.

Then later, when I got home after my meeting, I had some blueberry sorbet with sprinkles for an evening snack, followed by an apple and some popcorn. I tend to eat most of my food between 8am and 8pm, but I’ve found it’s best to have a substantial snack if I eat dinner early and head out again – otherwise, I’ll wake up in the middle of the night with my stomach growling!

An Empire apple and Angie’s popcorn

I enjoyed my snacks while watching an episode of Friday Night Lights on Netflix. There’s barely anything left on television that I actually watch anymore – now that Parks and Rec is over (and sadly it seems like Hart of Dixie has followed suit) all my mindless entertainment comes from old favorites. It’s probably for the best – I don’t have much time to spend in front of a TV anyway!