I’ve already written about my experiences exploring the Expo, running the Walt Disney World Half Marathon, and eating gluten-free around the World. But there are still a few thoughts left to share. 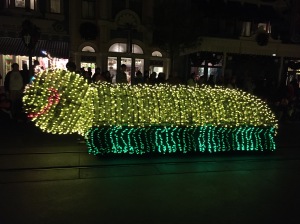 Don’t worry, you can run much faster than the Caterpillar in the Main Street Electrical Parade

The main thing is the magic of running a Disney race. I’d heard stories from fellow runners whose twin loves of running and Disney are so great that I didn’t really trust their view out of rose-colored glasses, and from those who came away disappointed because of the frustration of racing alongside too many first-timers. As for me, the extremely early wake-up call was not much fun, and my early arrival meant an extra hour out waiting in the cold, but otherwise my race morning was smoother than expected. As long as you provide a proof of time that puts you in the top corrals, it’s easy to avoid the congestion. I’d imagine it was worse further back, but if you’re faster than me (a solid 9-10 minute miler) unless you stopped to wait on a long photo line you’d avoid the traffic.

Speaking of those photos – yes, many of the lines were long. Disney races do cost a pretty penny, and part of the experience many people feel they are paying for is the chance to get some pictures with characters along the route. I decided only to stop at the castle and where lines were short. Luckily for me, starting in Corral D and running steadily for the first 4-5 miles at a <10:00/mile pace, when I made it into the Magic Kingdom the only crowded part was running up Main Street, U.S.A. Otherwise, the bathrooms were mercifully empty in Tomorrowland for a quick stop, and running through the castle archway, when I pulled to the left for an official photo, there were NO LINES. As in, five photographers, and only two runners in front of them, with race directors pointing out the quickest path to the nearest photographer to make it a one-minute photo stop. Of course, along the stretch of highway from Miles 7-10, the character lines were long because even the faster runners chose this point to take a short break – so I kept on running.

In Epcot, the photo area in front of Spaceship Earth was crystal clear with directions as well, I just think most of the runners in the first corrals who were finishing around the time I did felt the same way as me – a stop at Mile 12 was not worth breaking the finishing momentum. And MarathonFoto is very pricey, but most runners were pulling out their own cameras for character stops (as I did around Mile 7) and since MarathonFoto is the race photographer for literally every New York Road Runners race, I’m accustomed to ridiculous prices and had planned to buy one special photo (my castle shot) and let my memories suffice for the rest of the race. 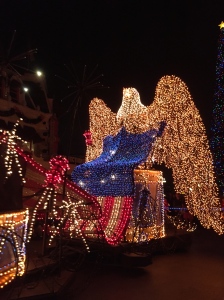 Otherwise, Disney’s attention to detail made this race experience so much fun. There was entertainment at the starting area and for the corrals, and shooting off fireworks as each corral was released was a nice touch. The long walk from the buses to the corrals was unfortunate, but whenever a race starts anywhere in Central Park that is not smack in the middle, my walk is more than a mile so I’m used to it. The NYC Half last year had all runners enter at 59th Street, and then walk up to start near 72nd, so I had a two-mile trek before I started there as well. Disney organized the starting area very well and manned the corrals conspicuously, so cast members didn’t let slower runners try and sneak into earlier corrals. And the music playing and cast members cheering along every mile of the course made even the boring stretches of highway go by quickly, which was particularly good for the first few miles when it was still pitch-black outside.

Entertainment and people amped me up and kept me going. It wasn’t just Disney characters and cast members; the Reedy Creek Fire Department came out with their truck and all the crews to cheer about Mile 8, and friends and family members of the runners were grouped at various points rather than just the finish line. I’ve volunteered for the New York City Marathon before, so I know that the cheering sections are somewhat similarly dispersed; in New York there are more crowds in certain areas, and the same is true at Disney. But the highway doesn’t have views of the five boroughs where the crowds are lacking, and they more than make up for it with the music, characters, and signs.

The finish line was fantastic. Hearing my name called out over the speakers was great, and the assortment of refreshments offered a much wider variety than I’m used to. Most NYRR races offer a bagel and either an apple, orange, or banana, so I take the bottle of water and the apple or banana if I’m lucky, and go. At Disney, there were boxes of carby treats that I obviously couldn’t eat, but in addition to bananas there were fruit snacks and other goodies. There were also tents for self-treatment and for $1/minute massages, with packets of Advil and Tylenol, and a giant reunion area for family and friends, helpful for my parents to find me. I remember desperately trying to call them after the NYC Half with my frozen fingers unable to handle my phone as I searched for them near the Wall Street subway station – this was much better!

Finally, the overall experience of the weekend was marked by the feeling of accomplishment I had throughout. Runners are encouraged to wear their medals in the parks and around the resorts, and cast members, fellow runners, and regular Disney guests were all quick to offer me congratulations on the race. This felt particularly sweet because it took me a long time to think of myself as a runner. When I first laced up my sneakers, just about two years ago, I was loath to call myself by that name, feeling I didn’t deserve it until I could run at least a 10k. Even then I didn’t quite feel worthy of it. But the whole weekend, I kept thinking that even two years ago, I never imagined I could run a half marathon. And now I’ve run two and have a third coming up! I run for myself, and not to meet a certain time goal or to keep up with anyone else, but it is wonderful to feel that accomplishment acknowledged just for a day or two. And having run for Team JDRF and raised money for juvenile diabetes for this race, I felt the recognition was also for the cause – achieving both goals was doubly wonderful. 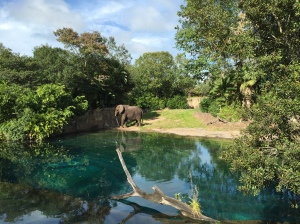 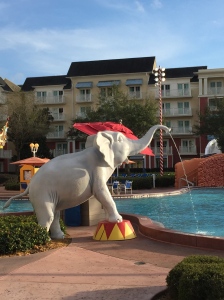 …and by the pool, the same day as your half marathon?

My family and friends find it funny that I loved running Disney so much. Actually, I’m the sort of person who, according to statistical analysis, is supposed to loathe Disney. I love quiet and natural beauty, I hate crowds and I’m pretty claustrophobic, I prefer good books read in cozy libraries to clubbing at the hippest haunts. I read David McCullough and Joseph Ellis for fun, and keep up with financial independence writers, whereas Disney has a reputation for being corporate, expensive, anti-intellectual, and so on and so forth. But for some reason, the magic still reels me in. Watching the Wishes fireworks, hearing the voice of Jiminy Cricket telling the audience to believe that wishes do and can come true, I’m filled with the same hope and optimism I felt as a child. So running up toward the Magic Kingdom, I felt like a real runner, and someone who had everything to run towards and to keep moving forward for. And that’s the greatest feeling in the world. 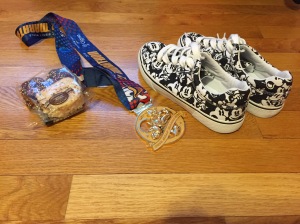 I’ve got an extra Minnie’s Bakery Rice Krispies Treat, a shiny medal, and a pair of Mickey kicks to keep me going until the next race!

8 thoughts on “Running Disney: Final Musings on My Half Marathon”