Well, I have returned from sunny Florida to the cold and snowy trails of Connecticut. But I did not come back empty-handed. Wonderful memories and some snazzy race swag will stay with me for many runs to come! 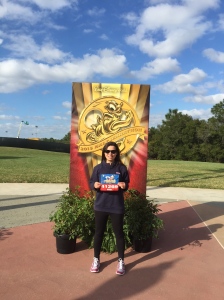 There’s so much to share about this weekend, so I’ll be dedicating a few posts to the event. First off, the race expo, which felt like an event in and of itself. Next, my main event, the Walt Disney World Half Marathon! And finally, the dazzling details of eating gluten-free at Disney, and my general musings on all the shenanigans. 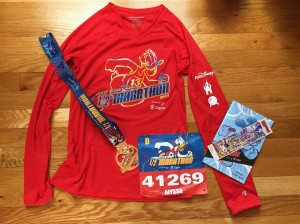 I arrived in Orlando on Thursday and the first stop was the runDisney Health & Fitness Expo. I have to say, this felt like an event in and of itself. I’m used to picking up my race bibs at New York Road Runners headquarters, which is a townhouse in Carnegie Hill located several blocks in each direction from any form of public transport. The expo for the New York City Half Marathon last year was absolute chaos in Chelsea, but I figured that was an exception to the rule. I was half right. 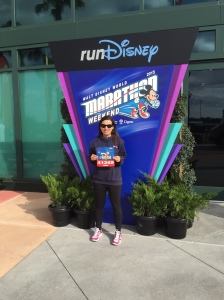 Donald Duck is the main man for the Half, but I needed a photo with the grand master of the weekend, Mickey!

While the runDisney Expo was even more crowded, Disney has the details down to a science. Bib and tech shirt pickup was extremely well organized, with cast members directing runners and their friends and family all around the Wide World of Sports, where the Expo took place. The location was great. If you were staying at a Disney resort, which I and most of the other out-of-town runners seemed to be, there were buses to and from the Expo to prevent a traffic logjam. And because the Wide World of Sports has several large buildings, a human logjam was also avoidable (so long as you didn’t want to snag a pair of the New Balance limited edition sneakers, in which case I heard there was a mad dash to snag some before they sold out!) I picked up my bib and tech shirt, and my mom snapped a few photos. There were so many places to do the photo thing as well, another organizational plus; Disney’s crowd control expertise was consistently in evidence!

In addition to all the commemorative runDisney merchandise, there were vendors for every sort of running and running-adjacent product under the sun. I’m usually a little jaded about this sort of thing – I started running with just some sneakers and a regular watch, and while I’ve upgraded to a Fitbit that is mostly semi-accurate and embraced the necessity of moisture-wicking socks and my comfy cloud sneakers, I don’t need a GPS that tracks every one-thousandth of a mile or a tech shirt that’s priced according to all of its extra zippers and pockets. And I usually just drink water even on long runs and avoid Powerade and Gatorade and shots and gels and bars, because I’m allergic to most of it anyway and it’s all what I consider “fake food.” However, while the expo had its fair share of such items, there were also booths for basic good quality running shoes that offered substantial discounts, and a Chiquita banana stand handing out free bananas and apple slices for playing a banana ring-toss game that was a refreshing port in the storm for a high-tech food Luddite like myself. So while I didn’t purchase any extras beyond an extra pair of socks, I’d personally praise the expo for sheer variety. I left feeling energized and ready to race! 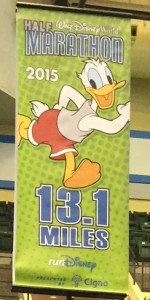 One thought on “Running Disney: Kicking off the weekend at the Expo”